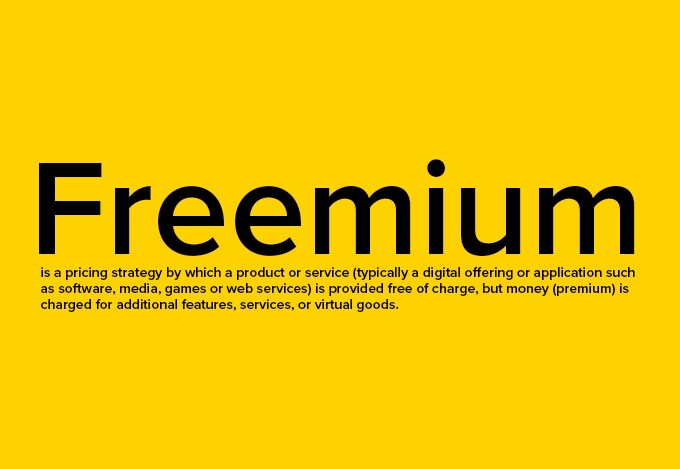 There's only 1 winner in Freemium (and it's not you)

Freemium is the portmanteau (smerging) of free and premium. Software is often launched with a free version to get you using the system, and then a premium version for when you exhaust the functionality of free and want to enhance your experience.

For many types of software the aim is to give you a taste of the programe in the hope that you'll pay once you start using it properly. But for other systems their strategy is a little different and it's playing a dangerous game with a core target that they rely on.

Spotify, YouTube (with Red) and many other systems offer their services for free to users. Those that use the system for free have to endure advertising as a 'cost' for not paying money to the software company. However if you upgrade to premium you banish the ads and can enjoy the service without interruption.

Spotify even goes as far as to use the ad-free service acquired through a premium subscription as a selling point.

But why is this dangerous?

Advertisers are obviously happy to market to the free users. In many cases there are a greater number of free service users. According to a 2016 article by 9to5mac written when Spotify hit 100m user the balance between free and premium users is off. Of the 100m users 30m were premium or paying users. For advertisers that was good news, as it meant they were still able to market to 70m users.

Businesses are often looking for customers that are willing to open their wallets, and those that are willing to do so for convenience or a seamless service are even more valuable. It's the same with Youtube Red, they serve adverts to free viewers but for $13 a month a user will not be served adverts.

YouTube has over 1.5m users paying a subscription. This a a small percentage of the total amount of users to YouTube but, given the choice, many brands would rather market to the demographic of people that pay to use the service, rather than those that would rather take the cheaper route.

The fact that these services exists is quite telling. The rise of ad blockers, and 'pay to not be pestered' services shows us that advertising in general has become a nuisance. Potential customers, wanting peace from the onslaught of ill-conceived and 'disruptive' messages are willing to part with money, regularly, to be left alone. Brands have been focusing on interruptive tactics, rather than seeking an approach that is more passive and less intrusive for clients.

The rise of Netflix as one of the world's biggest broadcast channels can partly be attributed to the fact that it delivers content on the user's terms. They don't interrupt you half way through a movie with a message from an advertiser - even though they would make billions if they did. They understand that users want a great experience, and if you deliver them that then you don't need additional revenue streams, you'll have plenty coming in from your core user base to suffice.

So how can a brand reach a potential audience if the reader/viewer is just going to ignore and skip the content?

Search advertising is a good route to take. Your advert only appears when someone is searching for a provider so you're not 'intruding' on their lives. Content marketing is another great avenue, again you're offering content that betters someone's purchasing experience and are only present if you're relevant.

Inbound marketing as a whole caters to the shift that the user demographics are displaying. As the audience becomes turned off to disruptive marketing brands need to tune in to creating a marketing plans that focus on adding value to potential buyers rather than subscribing to the notion that quantity beats quality in messaging.

To take a step towards better content marketing have a browse over our free guide by clicking the button below.

30 reasons to switch to inbound marketing